ashes, ashes, we all fall down 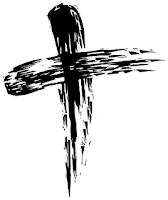 Well, it's that time of year again. Christmas is over and Epiphany has disappeared with the final bites of syrup-drenched pancakes from last night's Shrove Tuesday pancake supper. Today marks the beginning of Lent, what we call the 40 or so days before Easter--a time of self-discipline, prayer, fasting, reflection, and reconciliation. Traditionally, people give up something during Lent: sweets, TV, facebook, or alcohol, for example. Some choose instead to take on something, like exercising, a new prayer practice, or hand-writing letters. Whatever you choose to do or not do, the intent is to deepen your relationship with God. This year I have decided to read Scripture and write my reflections on the passages that resonate with me. Why am I telling you this? Well, once again, I blog partly to keep friends and loved ones informed of my seminary experiences, but also for accountability purposes--it's a way of forcing me to "walk the walk," you see.

I'm going to start by essentially breaking my first day of Lenten discipline. Tonight I want to focus mainly on the amazing experiences of today, because today was pretty awesome.

Two friends and I met on the patio at 6 this morning to offer the imposition of ashes to people on the metro (we didn't do this with a particular church, but modeled it after the "Ashes to Go" movement, which has appeared all over the internet as the latest meme). We placed ourselves at the entrance to a  metro stop near to the seminary. People walking by must have thought us a strange sight: two people dressed in black cassocks--one male, one female (a friend was borrowing mine, so I was in street clothes)--holding small bowls with ashes in them and a sign that said "Ashes to Go." I had made handouts explaining the meaning of this sacramental act, along with the website of the Episcopal National Church and a picture of the "The Episcopal Church Welcomes You."

What did we hope to accomplish? Well, I personally didn't really know what to expect when we went out there. I thought maybe a handful of people might ask for it, but at first, there were no takers at all. People stumbled in to the metro station, still groggy and half-asleep because of the early hour. As the sun rose, people began to wake up more (including us) and actually looked in our direction. There were two guys handing out newspapers, and one of them talked to us a little when traffic was slow. One man got off of the metro and was waiting around for his ride. He smiled at us, and so I eventually worked up the courage to ask him if he wanted some ashes. He asked us a few questions about it and then agreed--our first taker! He told us he was a Baptist minister and was waiting for a ride to his work. As time passed, more and more people began to look our way, and a few of them stopped. Most people were curious, some people smiled, some shook their heads, and some were completely indifferent. One person started to come over but then said, "Oh, I really should go to church. Thank you, though." A few said, "what a great idea!" Two or three of them called Daniel "Father." Chana, however, felt that she was getting weird looks--they didn't quite know what to do with a woman dressed in that clothing. One man came running to the entrance, started to pass us, and then turned and came up to Daniel. Yes, he wanted ashes, but when Daniel went to put the cross on his forehead, the man lifted his index finger and asked, "Catholic?" to which Daniel replied, "Umm, Episcopalian?" At that, the man turned on his heel and went back inside the station. Some people tried to pay us, a few asked if we were "for real." All in all, we probably had about 20 takers between 6:20 and 7:40. One of the newspaper vendors even asked to have ashes put on him!

When we got back to campus, we went to the Ash Wednesday service. Ash Wednesday is a Quiet Day on campus, which means that we are to spend the day in silent meditation on the Word and example of Jesus Christ. A local rector gave the meditation, which was very moving. However, I struggled a little with the reading from Matthew (6:1): "Jesus said, 'Beware of practicing your piety before others in order to be seen by them, for then you have no reward from your Father in heaven.' " Did this passage mean that the "Ashes to Go" movement was a way of flashing our religion? In some ways, perhaps it did, but I think our main point was not to flaunt our faith but to evangelize--to carry our faith out into the world instead of waiting for people to come to us. If nothing else, we served as a reminder to the world that we exist (and to Christians that today is Ash Wednesday so they can try to make it to a service). And I'm sure some of the people who approached us had never heard of Episcopalians before. But now they have!

After the meditation I went to the Holocaust Museum. I hadn't been inside the main part of the museum since going on a field trip with a class in college. It seemed appropriate to revisit it on Ash Wednesday, when we are to remember our own mortality and repent of wrongdoings. But I was admittedly a little nervous about walking around this particular museum with ashes in the shape of a cross on my forehead. One of the security guards asked me about it and I spoke with him and then handed him one of the leaflets I had made. More evangelism, woo hoo!

The museum was just as powerful this time as it had been the last time. I was still dumbfounded by the extent of cruelty inflicted on so many people--how can we do this to one another? How brainwashed or scared do you have to be in order to attempt to systematically wipe out entire villages full of people? More importantly, why did it take so long for most people to react to the Holocaust? And how could a benevolent God allow this to happen? Well, I've never been good at coming up with answers for the question of theodicy, and it's late, so I'm not going to attempt to explain my thoughts on it right at this moment. Needless to say, it was a sobering experience.

After returning to campus, a couple of us went back to offer ashes at a different metro station. This time we hit the rush hour just right, and had many more takers. We had similar reactions as in the morning (except that everyone was much more awake), such as curiosity, ambivalence, appreciation, and indifference. It seemed like the people approaching us were much younger this time than before. The average age was around 30, and we even had some young children participate! We wondered if we were getting mostly young adult participation because the 5 of us were in our mid-20s to early 30s. Who knows? We think the total number of people who received ashes and/or information from us was about 75-90. That's awesome! My classmates are hoping to continue the tradition with more VTSers next year. There's no way to measure how much of an effect we had on people today. But it's not about the numbers. The experience was worth it (lack of sleep and cold temperatures included!) even if it only helped a few people reflect on their relationship with God.


Collect of the Day for Ash Wednesday:
Almighty and everlasting God, you hate nothing you have
made and forgive the sins of all who are penitent: Create and
make in us new and contrite hearts, that we, worthily
lamenting our sins and acknowledging our wretchedness,
may obtain of you, the God of all mercy, perfect remission
and forgiveness; through Jesus Christ our Lord, who lives
and reigns with you and the Holy Spirit, one God, for ever
and ever. Amen. 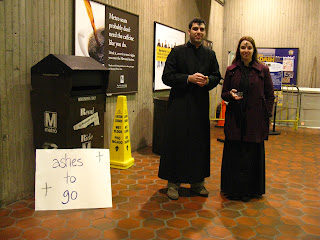 Daniel and Chana in the metro station
Posted by Lara at 00:20