launch out into the deep

Last week the theme of the readings was sacrifice and offering. Today’s theme is sin and redemption.

Before we get into the passages, let’s review what exactly the Church is talking about when it mentions sin. Sin as the Church understands it is intentional rebellion against God, choosing our own way instead of God’s way. Sin damages the relationship between us and God or us and our neighbours, because we focus on our own wants to the exclusion of the needs of others or of God.

In Isaiah we have this beautiful vision of the heavenly throne, with seraphim (six-winged angels) worshiping God. How does Isaiah respond? “Woe is me, I am lost, for I am a man of unclean lips” (Isaiah 6:5). Faced with all this glory, Isaiah realises his unworthiness. In the presence of God Almighty, Isaiah recognises his own sinfulness, and that of all humanity. Yet the story doesn’t end there. One of the seraphim touches a hot coal from the altar to Isaiah’s lips, cleansing him from his sin. He is then freed to go to his people and tell them that despite their sinful ways, God is desperate for them to restore their broken relationship.

There is discord in the Christian community that Paul founded in Corinth, and so Paul writes them a pastoral letter addressing their conflict. He says that whatever disagreements they might be having, the most important thing to remember is that Christ has died for our sins and has been physically resurrected, in accordance with God’s plan. We know this because the risen Christ appeared to crowds of people, to the disciples, and finally to Paul. The Good News of Jesus Christ is that even a sinner like Paul, who violently and systematically persecuted Christians, can be redeemed and then used by God.

In the beginning of his ministry, Jesus is wandering about from village to village teaching, preaching, and healing. Crowds begin following him wherever he goes, hungry for a connection with God. As the crowd begins to get a little too close for comfort, Jesus steps into a boat just off of the shore. He asks Simon Peter to take him a little further into the lake so that he can teach the crowds. After he is finished, he tells Simon to “put out into the deep water” and use their nets to catch some fish (Luke 5:4). I can imagine Simon Peter chuckling nervously, catching the eyes of the other fishermen. What does this itinerant preacher, the son of a carpenter, know about catching fish? He protests, saying, “Master, we spent all night fishing but didn’t catch a thing” (v. 5). And then he humours Jesus and goes out anyway. When they put the nets out, all of a sudden they can’t contain all of the fish swimming into their nets and have to call for help. Even then, the boats are so full they begin to sink. And how does Simon Peter respond? “Go away from me Lord, for I am a sinful man!” (v. 8). Faced with this miraculous power that he perceives to be of God, he acknowledges his unworthiness. Jesus tells him to not be afraid, for despite his sins God has a plan for him. And he drops everything and follows Jesus.

The story of Jesus calling the disciples as they were fishing is one of the few stories found in all four Gospels. Luke’s account is the only one that mentions Peter saying he was a sinner. I think we have this idea that we have to be perfect before we can step up to the altar, or before we have any authority to speak of God and how God has been a part of our lives. How many of us respond to God’s call with “Go away from me, Lord!”

The thing is, none of us is worthy of God’s love or even notice. We fail repeatedly. We hurt each other. We hurt ourselves. And in doing so, we hurt God. Lest you think you are alone in that, the passage from Isaiah is commonly read at ordinations, a good reminder to clergy that we are in the same boat.

The amazing thing that we learn from the Bible is that God is constantly reaching out to us, calling us back into relationship. Over and over again, just like in the readings today, God uses people who aren’t good enough. Who wouldn’t make the cut if it were up to us. Sinners like Peter and Paul, one a humble fisherman and the other a persecutor of Christians, became the rock of the Church and missionaries of the Gospel of Christ. What must it have been like to be told about Jesus by these uneducated fishermen? And yet God consistently entrusts the Gospel to those we least expect. But who better than poor, humble people to teach us about humility? And who better than fallen and broken people to teach us about God’s forgiveness, redemption, and mercy?

We are all broken. Every one of us. But we come to the altar to remember that our God was broken for us. Our story begins in sin, but it does not end there. If you’ll notice, all three of the passages included confession. In the presence of God, Isaiah, Paul, and Peter all admit their faults, they come clean. God does not give up on us but calls us to an amendment of life, and when we confess, we find redemption.

What is the response of all three, Isaiah, Peter, and Paul, to this saving grace? Isaiah goes out into his community and tells them about God. After his conversion Paul spends the rest of his life spreading the message of the Gospel. Peter drops everything and follows Christ. And now the faith has been handed down to us. Our stories have been added to their stories, and so telling this story is our task, too. If it appears too daunting, let me point something out to you.

In the Gospel passage, where Jesus tells Peter to “put out into the deep” this can also be translated as “launching out into the deep” (v. 4, KJV). In Israel water was a metaphor for chaos (remember the Israelites had to have a whole ocean parted before they would cross over to the other side). So when Jesus asks Peter to launch into the deep, we should see this as a message “to encourage the church to drop its nets into the chaos of life today” (Ronald J. Allen, commentary on workingpreacher.org). We are faced with the stark reality that Christianity is not as popular as it once was. We can’t assume that people these days know about Jesus. But we have in our very hands this incredible story of a God who loves us in our brokenness. Who calls us back, again and again. Who says that not even death or hell or anything in heaven or on earth “can separate us from the love of God in Christ Jesus” (Romans 8:38-39).

Peter and his fishermen friends “model what the disciples and the church are to do: they are to do what Jesus says, even in the face of unpromising circumstances” (Allen). Who knows what we’ll find in our nets? We are all called to launch into the deep, confident that God can—and indeed is—working through broken people like us to bring the message of Christ’s redeeming grace to the world. 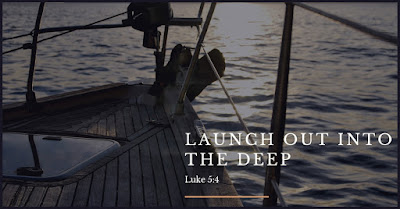