faith and hope in unexpected places

You can find the readings for the day here (I used Track 2). You can listen to my sermon here.

“and turning to the crowd that followed him, he said, ‘I tell you, not even in Israel have I found such faith’” (Luke 7:9). Amen.

Last weekend I had the privilege of journeying with two other folks from All Saints to participate in a young adult gathering. Now, I’m going to be honest and admit that I was interested in going primarily because the meeting was hosted by six brothers from the Taizé community. Having been in love with the music of Taizé since my early teens, and having had the opportunity to spend some time in their community last year, I was looking forward to worshiping in that style for a few days. But this was not really what the weekend was about. The experience was one of many gatherings that the brothers call “the pilgrimage of trust on earth.” This particular one took place in the badlands of South Dakota, on a section of the Pine Ridge Indian Reservation called Red Shirt Table. The theme? Reconciliation.

The Oglala Lakota who extended the invitation for the gathering spoke of not forgetting past wrongs, but attempting to put the past behind them. And what a past it is! Repeated mistreatment by the government, who forced them to move to a place considered uninhabitable. And when gold was found on part of the reservation, even that land was taken away. This history has led to a troubled present. The Lakota on Pine Ridge face a stark reality: they live in the 2nd poorest county in America.* 1 in 4 children are born with fetal alcohol syndrome. Almost half of all the people on the reservation live below the poverty line. And unemployment is at 80%. Eighty percent! As one of the elders said, “If that were the statistic for the whole country, everybody would be rioting.”

As we traveled along the reservation, we noticed the land was dotted with trailers. Because there are very few jobs and the land is not good for farming, over time they have had to rely on the government--the same government that got them into this situation--for food and health care. This naturally fosters helplessness, a seemingly never-ending cycle of dependency. Alcoholism, diabetes, obesity, and suicide rates are through the roof. The only place in the western hemisphere with a lower life expectancy than Pine Ridge is Haiti.

But this is not the whole story. What we experienced last weekend was a people who acknowledged their pain and brokenness, but gracefully looked ahead toward a better future. They opened their hearts and their land to us as an offer of reconciliation, inviting almost 600 of us to make our home among them for the weekend. They donated two buffalo to feed us, preparing them in the traditional way of cooking them in the ground. They shared stories that had been passed down from generation to generation. They taught us a traditional dance called the snake dance, where everyone holds hands and coils into a circle, then out, and then back into a complete circle. This dance is performed every new year to symbolize letting go of the things that happened in the past and embracing the future. As one leader said, “Putting the past behind us is the only way we’ll be able to move forward.”

Sometimes hope and faith are found in the most unlikely of places. This is what Jesus experiences in today’s Gospel reading from Luke. Jesus has just begun his ministry at the ripe old age of 30 (Luke 3:23). He’s been teaching and healing and exorcising to mixed reviews. Many have begun to follow him, but the Jewish leaders are skeptical and the people in his hometown are not so fond of him. In fact, when he tells the people of his hometown that their ancestry and faith does not make them any more special in God’s eyes than the Gentiles, they try to throw him off a cliff! (4:24-30). He escapes and continues his ministry elsewhere. Fast forward to today’s passage: Jesus enters the town of Capernaum and is approached by some Jewish elders. They speak on behalf of a local centurion, who has a slave that is very ill. The elders call the centurion, an officer of Rome, “worthy,” and describe him as a man who loves the Jewish people and even built them a synagogue. Jesus, intrigued, makes his way to the centurion’s house. Before he gets there, however, the centurion sends some of his friends to meet him. You see, according to Jewish law, if Jesus enters the centurion’s house, he will be made ritually unclean. The centurion not only cares for the people under his command, he understands and respects their customs! Having only heard of Jesus by word of mouth, the centurion is confident in Jesus’ ability to heal his slave, even from a distance. He intuitively understands that Jesus is the Lord (7:6). In response to this, Jesus heals the slave, exclaiming, “...not even in Israel have I found such faith” (7:9-10). Jesus lets us know that faith can be found in unexpected places.

When the 600 pilgrims made their way to the gathering this past weekend, many of us thought we were going to raise the spirits of a downtrodden, dispirited people. But we came to the realization that spreading hope and sharing faith was not a one-way street; we found that we left with a sense of hope and a stronger faith ourselves. As one college senior from Minnesota put it, “From the outside, a lot of us come in with hearing stories about the reservation and of this land and that there are people who lacked hope and are in need of a reason to hope and to have faith. And what I know I have experienced and several people in my group have experienced is [that] it’s the exact opposite. There is no lack of hope in this land; there is no lack of faith. I think that all of us leave here with a lot of hope that this community and this land has provided us.”**

In this week’s Gospel lesson, Jesus is calling us to look around us for signs of hope, healing, and faith. Reflect on your own past. Where in your life have you experienced moments of healing? It may be that in the darkest, most barren, and unlikely of times, we have most deeply experienced the grace and love of Christ. Signs of hope, healing, and faith are all around us. You may find them at the farmer’s market or at the gas station or maybe even in the person in the pew across the aisle from you. This week as you go about your daily life, keep your eyes peeled; faith and hope may be found where you least expect it. 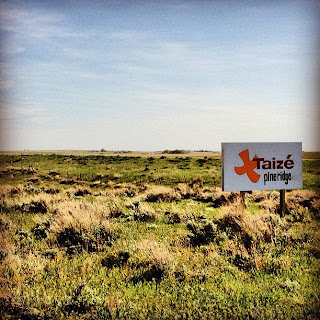 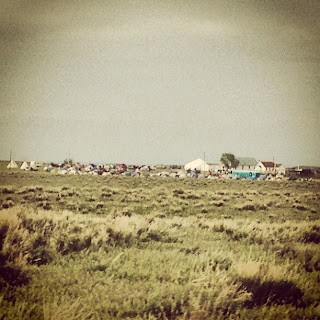 tents holding roughly 600 pilgrims.
the brothers from Taizé slept in the tepees! 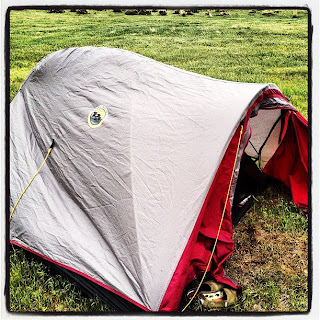 tent holding me and Laura 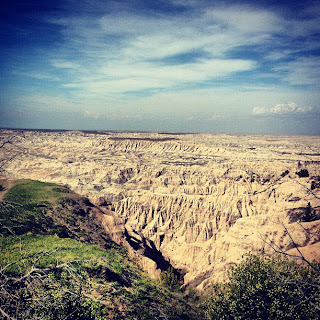 view of the badlands. we went on a 4 hour hike out there! 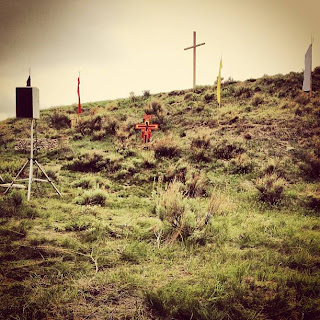 view from where we worshiped.
you can see the cross from Taizé and 4 flags representing the four
winds, an intersection of Christian and Lakota traditions 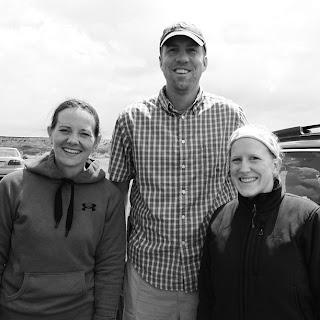 the weary pilgrims after 3 days of not showering, about to head on the road back home.