all creatures great and small

“The LORD God said, ‘It is not good that the man should be alone; I will make him a helper as his partner.’ So out of the ground the LORD God formed every animal of the field and every bird of the air, and brought them to the man to see what he would call them; and whatever the man called every living creature, that was its name” (Genesis 2:18-19).

May the words I speak and the words you hear be God’s alone. Amen.

We are gathered together today on this crisp fall morning to celebrate God’s glorious creation by sharing in the blessing of the animals. I’m guessing that many of you know that this tradition is a way we honor the memory of St. Francis of Assisi, the man who began the order that came to be known as the Franciscans. He was born a wealthy man, but gave up his wealth to embrace “Lady Poverty” and her life of simplicity. Francis might be most well known for his love of animals. He is said to have organized the first Christmas manger scene, so the next time you see a nativity set or play, you can thank him for the inclusion of camels, donkey, sheep, and other animals. In fact, Francis loved animals so much that some legends say he preached to flocks of birds and even blessed a wolf that had been terrorizing a village (don’t worry; he only blessed the wolf after he set up an arrangement between the wolf and the villagers). As silly as some of these stories sound, the point is that St. Francis recognized the true gift animals are in our lives. Not only do they bring us joy, they are some of life’s best teachers.

Growing up, my first pets were a pair of goldfish named Jack and Jill. Now, the two of them were pretty and all, but all they did was swim in circles; I couldn’t teach them tricks. What I really wanted was a dog. Being the oldest of four, I took it upon myself to make this petition to our parents. We had been begging them for years, but when I was 15 or 16 I decided to show them that I really meant it this time. I went to the library to research what breeds were good with children and what were the best methods of caring for and training them. When I presented my parents with what I had researched, they finally agreed to start looking for a dog. When we finally chose a dog, I, as the oldest, became in charge of taking care of him. Caring for Muddles taught me about responsibility and sacrifice. I woke up 30 minutes early every morning to feed and then play with him. Granted, it was more difficult in the winter months when it was bitterly cold outside, but it was worth it to spend time with him, watching him grow from a puppy to a full grown dog.

Muddles also taught me about selfless love, forgiveness, and pure, unadulterated joy; he was always happy and excited to see me when I got home from school. I used to chase him or get him to chase me. Then I would fall down exhausted and play dead, which would cause him to come sniff my face and ears, which--of course--would tickle and cause me to laugh, which would make him bounce around gleefully, which would cause me to laugh harder. I treasure these happy memories.

Another thing Muddles taught me about was the value of life. Unfortunately, our pets do not have the same life span as we do, and when that sad day comes, it is if we have lost a family member. One morning we woke up to find that Muddles had died in his little house, facing the back door. We went out back by the creek, dug a hole, and buried him in his blanket. Then each of us stood around his grave and shared our favorite memories of him. He had lived life to the fullest, and our lives were fuller because of him.

In today’s reading from Genesis, we hear from the second creation story. In this account, God creates Adam first, and then all the other creatures. Did you notice that when Adam needed a helper as his partner, God did not immediately jump to Eve? Instead, God “formed every animal of the field and every bird of the air” (Gen. 2:18). I think that God realized how much we get from their companionship, how much we can learn from them. You see, when we care for animals, we learn how to care for each other better. St. Francis said it best: “If you have men who will exclude any of God's creatures from the shelter of compassion and pity, you will have men who will deal likewise with their fellow men.”* The love we show our pets is a model for the love we have for one another, and a window into the love Christ has for us.

On this day of animal blessings, pause for a moment and think about the animals that are or have been a part of your life. Think about their sloppy greetings, the gifts they leave on the back porch, the joy they bring you. Even if you’ve never had a pet, you can still marvel at the beauty of God’s creatures: the graceful flight of the cranes at sunset, the adorable baby giraffe and sea lion at the zoo, the cows grazing peacefully in the pastures. God knew that we needed animals in our lives. Our world would be incomplete without them and our lives are richer because of them. And for that, we give thanks. 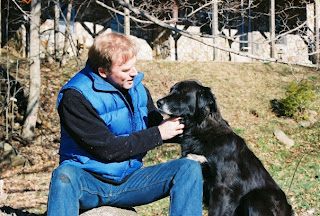 My dad and Muddles

*You can find the St. Francis quote here.