May the words I speak and the words you hear be God’s alone. Amen.

In last week’s reading from Mark’s Gospel we heard Jesus’ first prediction of his death and resurrection. It started with Jesus asking the disciples who people thought he was, followed by who the disciples thought he was. Peter answered “You are the Messiah” (8:29). When Jesus began to describe what being the Messiah actually meant, Peter pulled him away from the group and rebuked him. Jesus, in turn, rebuked Peter, just as he rebuked evil spirits and the winds of the stormy Galilean sea: “Get behind me, Satan! For you are setting your mind not on divine things but on human things" (8:33).

In today’s reading from Mark, when Jesus predicts his death and resurrection a second time, there is absolutely no reaction from the disciples. No protest, no questions, nothing. Based on how Jesus reacts to Peter before, it is understandable that the disciples are a little gun shy. The disciples do not respond to Jesus’ second death prediction at all, even though they don’t understand what he’s telling them. And they clearly don’t understand, because the very next thing that happens is that they argue among themselves.

For the second time, Jesus tells his disciples that he is going to be killed and rise again, and they begin to argue over who is the greatest. Are they trying to figure out who will replace Jesus after he dies? Do they just not get it?

If we think about it, Jesus’ death and resurrection is not an easy thing to understand, even in this post-Easter world. It’s tempting for us to look back and criticize the disciples for being clueless, to be impatient with their lack of understanding. But Jesus is patient, and explains what it means to follow him. You see, Jesus is not the Messiah the disciples expect him to be. His plan is not to lead the chosen people to overthrow the Roman government. No, his idea of leading--of power--is very different. Following Jesus is risky. After the first prediction of his death, Jesus says that anyone who follows him will have to “deny themselves and take up their cross,” which might lead to their deaths (8:34; 35). It’s as if he is saying, “Don’t follow me half-heartedly; be prepared to die for what you believe in.”

After the second death prediction and the subsequent arguing of the disciples, Jesus attempts to describe the upside-down hierarchy of the Kingdom of God. When following Jesus, what makes you great is not how much power you obtain, but rather how much you give away. Your status in the heavenly kingdom improves when you lower your earthly status to that of a servant.

As he is saying this, Jesus takes a little child into his lap. We might get distracted by the image of Jesus hugging an adorable kid, but Jesus is not just trying to be cutesy. You see, in those days children were considered the property of their parents, without freedom or rights until they reached adulthood. In fact, the Greek word for child can also mean slave.* To “welcome one such child” means to welcome someone who has no rights, who has to depend on the generosity of others for their sustenance. And in welcoming the weak, the poor, the oppressed, we welcome God. This goes beyond even the Southern hospitality that I grew up with; Jesus is describing intentional and radical hospitality.

This idea of radical hospitality might remind us of the stories in the Old Testament of people like Abraham and Lot entertaining angels in their midst. Or perhaps our thoughts turn to Matthew’s Gospel, where Jesus says, “just as you did it to one of the least of these who are members of my family, you did it to me.” (Matthew 25:40).

But what does it mean to be a “servant of all” (Mark 9:35)? What does radical hospitality look like in our world? Does it even exist today? The best example I have found is when I visited the country of Myanmar, also known as Burma.

In a land bordering India, China, Thailand, and even Bangladesh, live the most hospitable people I have ever met. Almost everywhere you look there is a bowl of water outside buildings and homes for passers-by, in case a stranger is thirsty. At the Myanmar Beauty Hotel in the town of Taungoo, every effort was made to ensure that my group and I enjoyed our stay, including offering American dishes at every meal, in case we didn’t like the local options. Our hosts, the Bishop of Toungoo and his staff, went above and beyond to provide us with a good experience, from lending us the diocesan translator, to exchanging money, to driving us around town in his truck. Also, and this is a great example, at the Winner Inn in the former capital, Yangon, one of the hotel clerks spent the night going all over town searching for a missing camera that one of our group had accidentally dropped in a taxi. My friend had given up hope that she would ever see it again, but, lo and behold, the next morning the clerk was waiting for her in the lobby; he’d found the camera!

At one point on my trip I wondered if my group and I had received such good treatment because we were foreigners, because they wanted to make a good impression on us. I soon found out that this radical hospitality was not just reserved for special guests; it permeated everyday life in Myanmar. When visiting the tiny village of Maw Bvi, children would run from house to house, and when neighbors saw that something was going on in another’s house, they simply walked in. There did not seem to be as much emphasis on something being strictly “mine” but, rather, a sense of “this belongs to my family” or “this is ours.” Therefore, people worked more readily together to make a living that would sustain them all. In the town of Bagan, when one of the pony-cart drivers was having difficulty with his horse, several people in the area came over to help him out. At a stand on the side of the road, the people selling crafts encouraged us to support one of their friends whose skill was climbing a very tall tree to fetch leaves, nuts, and fruit. And, again in Bagan, the pony-cart drivers recommended restaurants, stores, pagodas, and places for boat rides: people in the community helped one another out. Similarly, carpooling was a necessity. It was rare to find a vehicle with fewer than three people in it. In fact, there were often up to fifteen (or more!) people riding in a truck, crammed in the truck bed like sardines and then spilling out to hang from the outside or sit on the roof. In short, the way the people of Myanmar treated both strangers and each other was one of the many reasons I fell in love with the people there.

More than anything, from observing the way of life in Myanmar, I came away humbled. I had considered myself a “good” Christian (whatever that means) but in a mere month of my living there, the people I met in Myanmar demonstrated more genuine faith than I felt I had known in my lifetime. The best illustration of this would be when we went to Maw Bvi and visited the homes of local villagers. Two students from the local Anglican seminary, Holy Cross, went with me, and we took turns praying for the families we visited. In each of the three homes, we were presented with something to eat and drink. The first two families, at great personal cost, had purchased sweets and other wrapped food items that were safe for me to eat. I ate and drank a little at each one to be polite, so by the time we made it to the third one, I was stuffed! In the last home lived a brother and sister in their 50s or 60s. The brother had been in the army and his sister had worked in a shoe factory. Decorating the thatched walls of their simple home were old calendars and a couple pictures; they were the least well-off of the people we had visited. Despite this, the seminarians and I were each proudly presented with a cup of tea and a small bowl of beans. I had already decided to risk being ungracious by not eating anything because I was full and also unsure if the food had been properly cooked or how long it had been sitting out. At one point in the conversation, I looked down to see that there were ants in my bowl. This caught me by surprise and I had difficulty tearing my eyes away. The seminarians must have seen me looking down intently because when our hosts were not looking, one of them quietly switched bowls with me, and then began to eat around the ants. Not wanting to offend our hosts or embarrass them by pointing out the ants, my fellow seminarians ate enthusiastically, making lively conversation. I sat there feeling both humbled and humiliated, unable to convince myself to take a bite despite my feelings of guilt. What made me feel the worst was realizing that the beans had been their supper.

When faced with such examples of radical hospitality, how should we respond? My friends in Myanmar helped me realize that regardless of scarcity or abundance, we are called to respond to the world with grace, humility, generosity, hospitality, and love. We respond by welcoming the person who smells a little funny. And by making a point to occasionally sit beside the person who knows how to push our buttons. By introducing ourselves to a new person at work, school, or church. By inviting our Muslim co-worker and her family to dinner. By offering an elderly parishioner a ride to church or our refugee neighbor a ride to the grocery store. By writing get-well-soon cards to a classmate in the hospital. Responses will vary depending on the person, but all of us are called to respond in some way. How are you called to respond?

If we open our eyes, opportunities for hospitality are all around. Jesus tells his disciples (and us!) to embrace a servant’s heart and to welcome all children of God, regardless of status. “Whoever welcomes one such child in my name welcomes me, and whoever welcomes me welcomes not me but the one who sent me” (Mark 9:37). 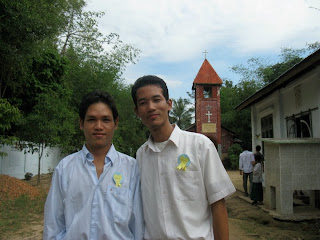 Joseph and Joseph, my seminarian friends
(behind them is the local Anglican church in Maw Bvi)