a house of prayer for all nations

Probably all of you reading this are aware that I spent two weeks out of the country, visiting family in Germany and exploring the ecumenical monastic community of Taizé, in a small town in central-east France. Because so much happened within that short week and I had such a great experience, I will probably be using any excuse I can to write about Taizé. That’s just how it’s gonna be.
In today’s reading from the Gospel according to Mark (11:12-25), we find the familiar story of Jesus’ “temple tantrum” (really wish I could claim that phrase as my own, but I know I read it somewhere—almost certainly on facebook). I know I’ve heard this story many times before, but in reading the passage a few times, I zeroed in on Jesus’ words, “Is it not written, ‘My house shall be called a house of prayers for all the nations’? But you have made it a den of robbers” (v. 17). In the past, my focus has been on imagining Jesus’ anger and disappointment at the way things had progressed in the Temple. But I never really attempted to picture what I thought his vision of the Temple as it should be would actually look like.
Thanks to my trip, this has changed. I have witnessed “a house of prayer for all nations,” every time I went to a service at Taizé. The prayers, readings, and songs were in different languages (because we sang songs in so many different languages, everyone ended up singing in a language they had difficulty pronouncing. So at some level, we were all on the same level). The people who came to the service, as well as the brothers, were from around the world. I met people from Germany, France, the Netherlands, England, Russia, South Korea, the US, and New Zealand. And that’s just the people I met personally. When I first got there, there were about 100 people. By the end of the week we had grown to 400 (last week they had 800, and this week they were expected to have 4,000!). With each service, I knew more and more people, so that by the end of the week, even with the growth, I was no longer worshipping in a room full of strangers, but with friends.
We had become a congregation.
Despite the large amount of work and energy it must take to host so many people, I hope the brothers realize what a gift they are giving us pilgrims. I’m not saying that the prayer services were better than any other service I’ve been to, but there was certainly something special, something holy about that place. 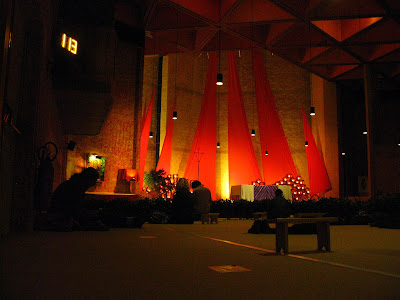