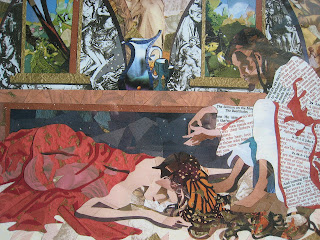 "May the words I speak and the words you hear be God's alone."
A dignified dinner interrupted by an unwelcome guest. An intimate moment rewarded with an absolution. A lesson followed by an admonition. The verses of today’s Gospel are saturated with action and seasoned with vivid imagery. We know exactly what kind of jar the woman brings, we observe the elaborate ritual she performs, and we are even privy to the thoughts of the host! In fact, the author’s story telling provides us with so much detailed information that it is almost more than we can chew on in one sitting. But there is one ingredient that remains constant throughout this pericope: transformation.
“A woman in the city” –that’s all we know about her. Well, that, and that she’s apparently done a lot of sinning. We don’t know what her life has been like, what her hopes and dreams are, or what exactly has motivated her to defy societal convention and approach a table with religious men. We only know that her sins are many, that these sins are known in the community, and that despite this, she has come to a stranger’s house to meet Jesus. Why does she choose this moment? Why doesn’t she wait until he leaves the Pharisee’s house? Maybe her need for forgiveness is too great—maybe she can’t stand another second living with the weight of guilt. Maybe she is just trying to approach him before she loses her nerve. We don’t have the answers to these questions, but in a particularly poignant scene we observe her tenderly serving her Lord, immune to the critical stares and whispers of the dinner guests. Throughout the passage she remains as nameless as her sins, but in the story that Jesus tells the Pharisee, we are to assume that she is the debtor who owed a lot of money. She may not be named, or even speak a word, but she is forever identified through her actions, which demonstrate a clear understanding of who Jesus is and how she should respond to him. From that point on, in Jesus’ eyes, she is known not as a sinner but as a faithful and forgiven woman.
Now let’s turn to the host of the dinner party: the Pharisee. The word Pharisee comes from the Aramaic word meaning “to divide and separate,”[1] referring to the religious group’s intention to separate themselves from sin. In a verse just before today’s passage, the author of Luke makes it pretty clear that he doesn’t look too kindly on Pharisees. In the beginning of today’s passage, he takes pains to emphasize that the host of the dinner party is one of these Pharisees. In stressing this point, the reader automatically knows not to expect too much out of him—at least, not anything good. True, the Pharisee has invited Jesus to dine in his home, but he has neglected basic acts of hospitality. Other than that, there seems to be no indication that anything is out of the ordinary. Until a stranger shows up.
Everyone always talks about how beautiful this passage is, but from the Pharisee’s point of view I’m betting the whole situation is pretty awkward…Just imagine it: the guys are having a lively conversation and all of a sudden this woman—clearly a sinner—walks in unannounced. The men gasp and stop talking, their wine glasses hitting the table as they crane their necks to get a better look. They then begin to whisper and mutter, causing heat to rise in the woman’s cheeks, turning them a painful shade of scarlet. She pauses, takes a deep breath, and determinedly approaches Jesus from behind, her hands, clutching a jar of oil, shaking slightly. When she reaches him she looks down to see the blisters and layers of dust on his tired feet. That’s when the crying begins. And we’re not talking a drop or two running down her cheeks—it literally says she is raining tears on his feet. So, tears streaming (and nose running), she wipes Jesus’ feet with her hair and anoints them with oil, all the while kissing them repeatedly. The whole situation, from the point of view of the guests, is bizarre. When the woman enters and touches Jesus, the Pharisee knows exactly what kind of woman she is, and believes that a prophet would have reacted differently, would have turned her away rather than become unclean. The separation from sin that this Pharisee so intently strives for has instead resulted in a separation from a fellow human being.

However, as so often happens, everything changes when Jesus speaks. He turns to the Pharisee and calls him by his name, Simon, which comes from the Hebrew word shemá, meaning “to hear.” It is the Pharisee’s turn to hear not the voice of self-righteous criticism in his head, but the words of Jesus. “Simon, I have something to say to you.’ ”[2] “Listen up!” And from that point on in the passage, he is no longer referred to as “the Pharisee” but is known by name. Simon, the religious leader, becomes the student, and with this shift in identity comes a shift in expectations. Simon can no longer use his title as an excuse to avoid others. “Do you see this woman?”[3] Just as Jesus looks beyond the title to the man, so Simon is entreated to see, to really look at and recognize the woman for who she has become, not the woman she has been. Upon receiving forgiveness, Simon and the woman are invited to break free from being defined by their sins and remember that they have both been created in the image of God.
Perhaps the person with the most transformation in this passage is Jesus, himself. “Who is this…?”[4] the dinner guests wonder. Today’s passage comes at the start of Jesus’ ministry—we are just beginning to learn what Jesus is all about. The scene opens with him as a dinner guest, but not an honored one. The woman recognizes his love and mercy, but Simon thinks of him as “this man” and calls him “Teacher,”[5] believing he is not a prophet, after all. Jesus not only takes on this role of teacher, but in reading Simon’s thoughts, he proves that he actually is a prophet as well. It is in forgiving the woman’s sins, however, that Jesus assumes his most important identity—that of the Son of God. Jesus, as the Son of God, reveals the nature of God. And in the parable of the debtors we learn that God is unbelievably generous. The creditor, out of his abundance, forgives the debts of both. Likewise, God, out of the abundance of God’s mercy, forgives the sins of both. The woman and Simon are shown equal compassion—the difference between them is how they react to their new status as forgiven ones.
In coming to Virginia Theological Seminary, we have all gone through shifts in identity. Students have left behind professions, internships and undergrads and have become seminarians; some professors have just received tenure while others are moving towards retirement; quite a few students and even some staff have recently become or will soon become first-time parents; and even our Dean has converted from being an Englishman to becoming an official American citizen. Today’s pericope reminds us that an encounter with Jesus is transformational. You and I are here because on some level or another we have experienced Jesus’ love and it has radically changed our lives—changed the very core of our being and shaped the choices we make and how we interact with others and with the world. In our studies and common life here on the Holy Hill, as well as in our respective parishes, it is easy to get so wrapped up in classes and church and work that it becomes our whole world, our identity. We can fall into the trap of thinking that we as leaders are the only ones with something to offer and fail to learn from the ones we serve. It is also tempting to surround ourselves only with people who are similar to us—who view the world the same way and who have the same passions and worship practices. Yet in doing this, we separate ourselves from things and people that make us uncomfortable, that challenge us. But in a post-9/11 world where wars and revolutions continue to rage on, famine in East Africa threatens to kill hundreds of thousands of people, and in our own country the national poverty rate is rising, we can’t afford to separate ourselves from each other anymore. Today’s passage is inviting us to examine our lives and to ask ourselves some difficult questions. Where are we separating ourselves from our fellow human beings? Where are we creating identities for others based on our limited information of them? How can we reconcile our differences and work together to create a better world? There are no straightforward answers to these questions or simple solutions to these problems. You and I know that Christianity is not easy—we have to travel the way of the cross before we can experience the joy of resurrection. But we live with the promise that we will get there someday.
Throughout our lives we will continue to have shifts in identity. Those of us who go on to become priests may even experience an ontological change upon ordination. But the most important identity any of us here can ever have is actually something we share with Simon and the woman and all of humanity. We are, first and foremost, beloved children of an amazingly gracious, forgiving and compassionate God. In the face of this, how are we going to react?